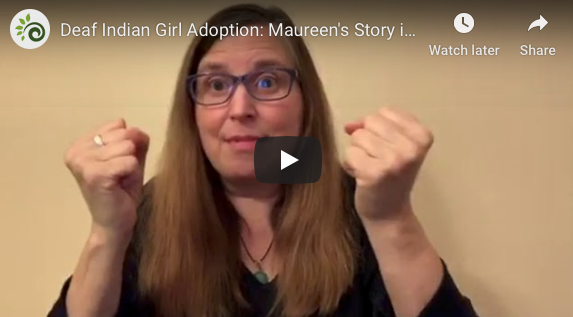 Hi, I’m Maureen Behrens. I’d like to share my adoption story, focusing on communication access and medical-related issues. I adopted my daughter about 10 ½ years ago, through the Holt International Adoption Agency based in Oregon. When they told me that I had been matched with my daughter, I was elated and over the moon! My heart was pounding and so full of love at that moment. I was looking forward to it with much anticipation.

Through the adoption process, I worked closely with my social worker. The Indian agency was required to send me reports every three months, covering any issues related to medical, emotional, behavioral, social, and lipreading. The reports I received would indicate things such as weight gain, height, etc. I noticed that they always mentioned lipreading, so I asked my social worker to let them know that I wanted my daughter to learn to sign because otherwise, she would have no way to communicate with me when we met. She wouldn’t know how to tell me when she needed to go to the bathroom or if she needed a drink of water, for example. Because my speech skills are nonexistent, we’d be at loss for communication.

The foster family, however, refused my request and continued to teach lipreading/speech skills. I argued back and forth with them through my social worker for six months, until finally, with just one week remaining before we were to meet, we got lucky. My daughter was moved to another foster family who lived closer to the building where she could learn ASL. A woman named Ida Thomas – bless her heart – had learned ASL from a Canadian pastor who had gone to India and met her at church. It was our lucky break. Ida taught my daughter for one week, covering signs for colors, plane, chair and so on.

From the moment when my daughter arrived and we met each other for the very first time, we had an amazingly powerful and instant bond, connecting through our both being Deaf. Interestingly, the same social worker who had advocated on my behalf for my daughter to learn sign, was totally astonished and remarked that she had never before seen such a strong first connection between a parent and adoptive child. To my great appreciation and gratitude, we made a written agreement that from that point on, any Deaf child who was placed through that agency would learn to sign. After we flew home, my daughter continued to learn and pick up more ASL.

Secondly, related to medical issues, in one of the reports I received every three months prior to my daughter’s arrival, I had noticed in one picture that her eye looked a bit out of focus. I asked the social worker to share my concerns about my daughter’s eye, but was told by the Indian agency that everything was fine. In addition to this, the doctor had written that my daughter had “growth retardation”, which meant that she would not grow anymore. Upset, I asked the social worker what that meant, but was told it was nothing. Despite my protests, she continued to say it was nothing. To my relief, right after my daughter arrived, she had a big growth spurt. My instinct about her eye, however, was correct. After seeing a doctor and undergoing a series of tests at the California School for the Blind in Fremont, it was confirmed that she had low vision and a few other diagnoses.

Importance of Asking Questions and Trust Your Instincts

My advice to anyone who may be considering adopting in the future is be sure to ask plenty of questions. Trust your instincts and speak up if you feel something isn’t right or if you notice something. Don’t let the agency do everything without considering your input. When I mentioned my concern about communication access and stood my ground, I was eventually able to get my daughter access to signing, and the same thing was true with my concerns that were related to medical issues. Thank you for watching.

Video description: Maureen is sitting in front of a light-colored all, wearing a black top, and signing her story.